This plugin provides a connector and recipes to interact with the Warp10 time series database, from reading data to executing WarpScript queries

This plugin lets you read data stored in the Warp10 database as well as execute WarpScript recipes, either in-database or by running a local engine.

In DSS, go to Plugins -> Installed -> Warp10 -> Settings -> Warp10 Connection -> + Add preset. There, set the base URL for your Warp10 instance, including the port number, as well as read and write tokens for that instance.

The different components allow for multiple use cases:

Explore Warp10 data as a DSS dataset and use it as input for your data projects. Warp10 data will be displayed in long format. 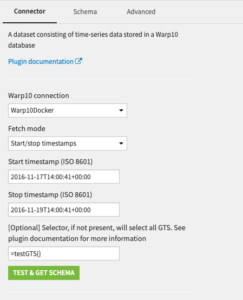 Execute WarpScript in-database (on Warp10) to create and write new GeoTimeSeries in Warp10. 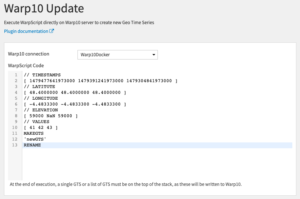 Execute WarpScript directly in-DSS. This mode embarks the engine to run WarpScript and doesn’t need the input data to be stored in Warp10. 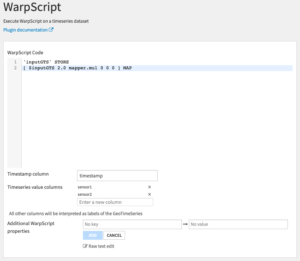 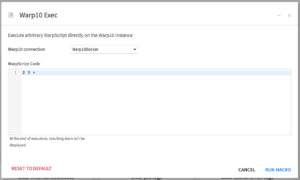