When you need to manually label rows for a machine learning classification problem, active learning can optimize the order in which you process the unlabeled data. The ML-assisted Labeling plugin enables active learning techniques in Dataiku DSS.

The plugin’s purpose is to ease the labeling task. First, the plugin, through the webapps, offer a powerful annotation tool for various types of data (images, sounds, texts, tabular data). For large datasets or with a limited labeling budget, we also propose an Active Learning recipe and a scenario that transforms the labeling task into an iterative ML-assisted labeling process.

When you need to manually label rows for a machine learning classification problem, active learning can optimize the order in which you process the unlabeled data. The ML-assisted Labeling plugin enables active learning techniques in Dataiku DSS.

Not all samples bring the same amount of information when it comes to training a model. Labeling a very similar to an already labeled sample might not bring any improvement to the model performance. Active learning aims at estimating how much additional information labeling a sample can bring to a model and select the next sample to label accordingly. As an example, see how active learning performs compare to random sample annotation on a task of predicting wine color:

This plugin offers a collection of visual webapps to label data (whether tabular, sound, image classification or object detection), a visual recipe to which sample needs to be labeled next, and a scenario trigger to automate the rebuild of the ML model that assists in determining which sample is labeled next.
<>

</>
For more details on how to use the plugin, use the reference documentation.

The plugin will require a python 3.6 code env.

This plugin offers labeling webapps for multiple use cases :

If you have a Missing code env error when creating a Dataiku Application, make sure you added the python code env in the parameters of your plugin (see more details). 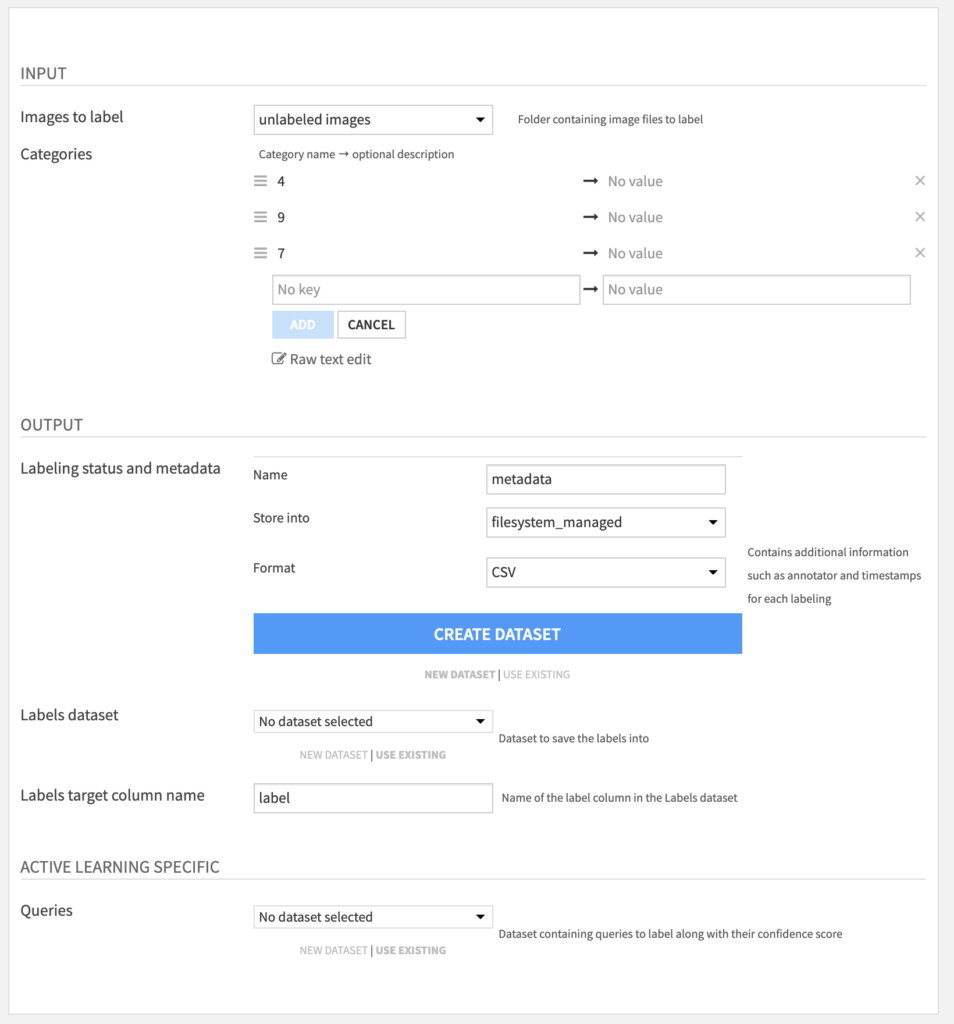 </>
Note that the latter queries dataset is optional as labeling can always be done without Active Learning. In this case the user will be offered to label samples in a random order.

When you need to label entities in text, you can use the webapp Text Assisting Labeling. On this webapp, there are some extra parameters that will make your labeling easier and faster.

The available inputs are the following :
<>

After the webapp has started, the annotation process can start. 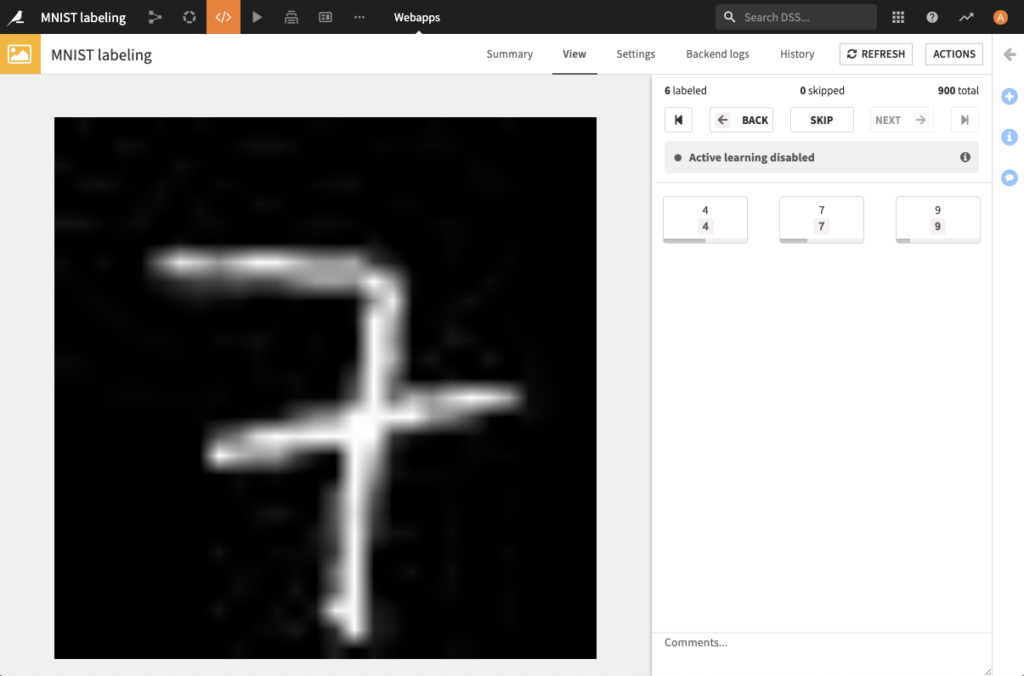 Note: For implementation purpose, in order to distinguish labeled samples from unlabeled in the tabular case, the webapp adds a column — called label_id by default — to the output dataset. This feature should not be used in any model.

For more details on the annotation WebApp, refer to the documentation.

When a sufficient number of samples has been labeled, a classifier from the DSS Visual Machine Learning interface can be trained to predict the labels, and be deployed in the project’s flow. In order to later used the Active Learning plugin, it’s required to use a python3 environment to train the model. Here’s a link describing how to create a new code environment in DSS . Make sure that it’s based on python3.

1. How to do Active Learning

Basically, here are the steps to do Active Learning :

For Active Learning on classification problem (on label per sample), you can use the following tutorial.

For Active Learning on object detection problem, you can use the following tutorial.

Active Learning is not available for Text Labeling.

2. Details on the Query Sampler methods

From the plugin, after the Query Sampler recipe is selected, the proposed inputs are:
<>

</>
There is only one setting to choose from, the Active Learning strategy. 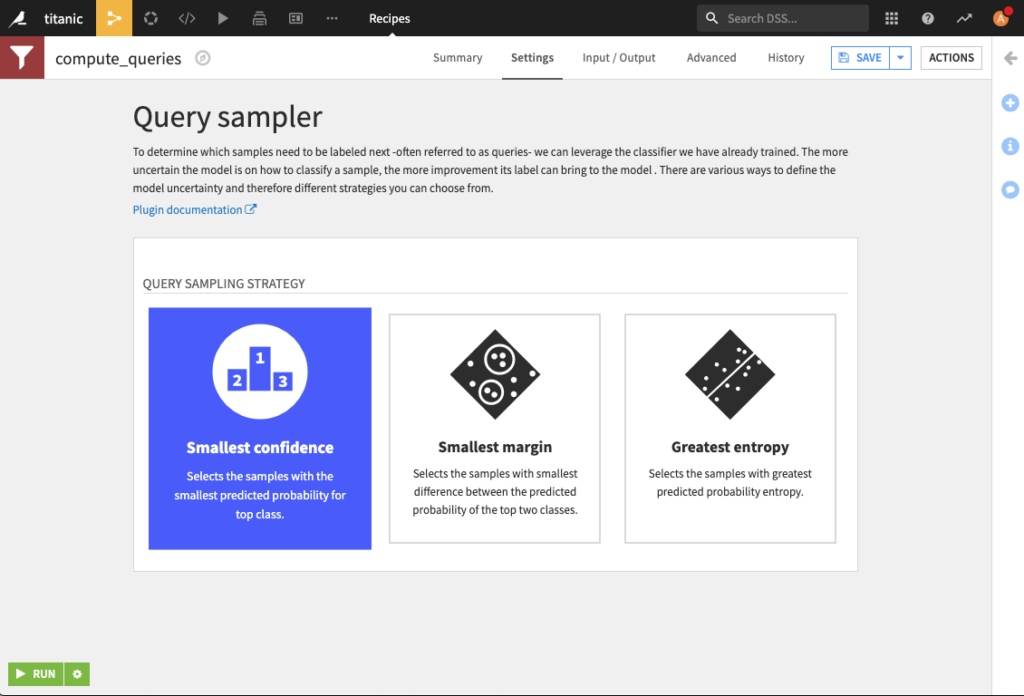 This plugin proposes the most common active learning strategies: Smallest confidence, Smallest margin, and Greatest entropy. Here are their definitions in the general multiclass classification settings with n classes. p^(i) denotes the ith-highest predicted probability among all n classes.

Note: In the binary classification case, the ranking generated by all the different strategies will be the same. In that case, one should therefore go with the Smallest confidence strategy that is the less computationally costly.

This is a confidence score based on the probability of the most probable class.

This approach focuses on the difference between the top two probabilities:

Shannon’s entropy measures the information carried by a random variable. This leads to the following definition:

In order to have an homogeneous output, this is normalized between 0 and 1.

Tracking performance evolution is useful in an active learning setting. For this purpose, a session_id counter on how many times the query sampler has been ran so far is added to the queries dataset.

This session_id is then reported in the metadata dataset, output of the labeling webapp.

The Active Learning process is instrisically a loop in which the samples labeled so far and the trained classifier are leveraged to select the next batch of samples to be labeled. This loop takes place in DSS through the webapp, that takes the queries to fill the training data of the model, and a scenario that regularly trains the model and generates new queries.

To set up this scenario, this plugin proposes a custom trigger that can be used to retrain the model every n labelings. Here are the steps to follow to put in place the training:
<>

The following is then displayed: 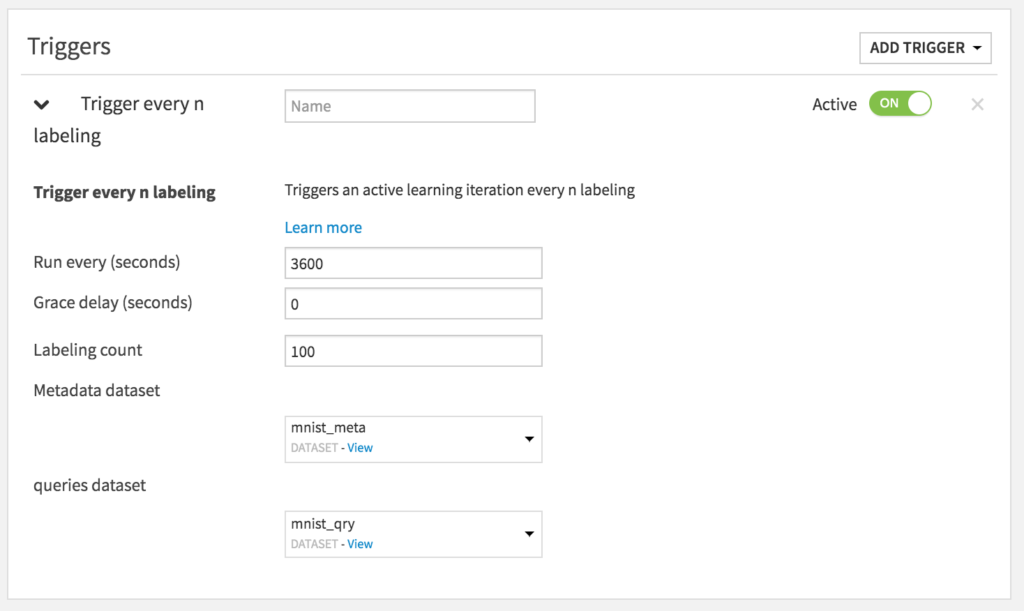 Last but not least, the following steps constitutes the full Active Learning scenario:

Use this recipe to reformat your dataset and make it compatible with DSS computer vision (available from DSS 10.0).

Let’s assume that you have a Dataiku DSS project with a folder containing images & annotations from the labeling webapp.
To create your first ‘Convert object detection annotations’ recipe, navigate to the Flow, click on the + RECIPE button and access the recipe from there. If your folder is selected, you can directly find the plugin on the right panel.

The recipe just needs to know the column name from your dataset which contains the annotations you want to reformat.