This plugin makes it possible to train, score, and deploy Generalized Linear Models from the VisualML interface.

Generalized Linear Models (GLMs) are a generalization of the Ordinary Linear Regression where:

These models allow flexibility on the dependency between the regressors and the response and are widely used in the Insurance industry to answer specific modelization needs. The GLM implementation comes from statsmodels package. Regression Splines rely on patsy.

The plugin is available through the plugin store. When downloading the plugin, the user is prompted to create a code environment, it should be on python 3. The plugin components are listed on the plugin page and can then be used in the projects of the instance. This plugin requires Dataiku V10+. 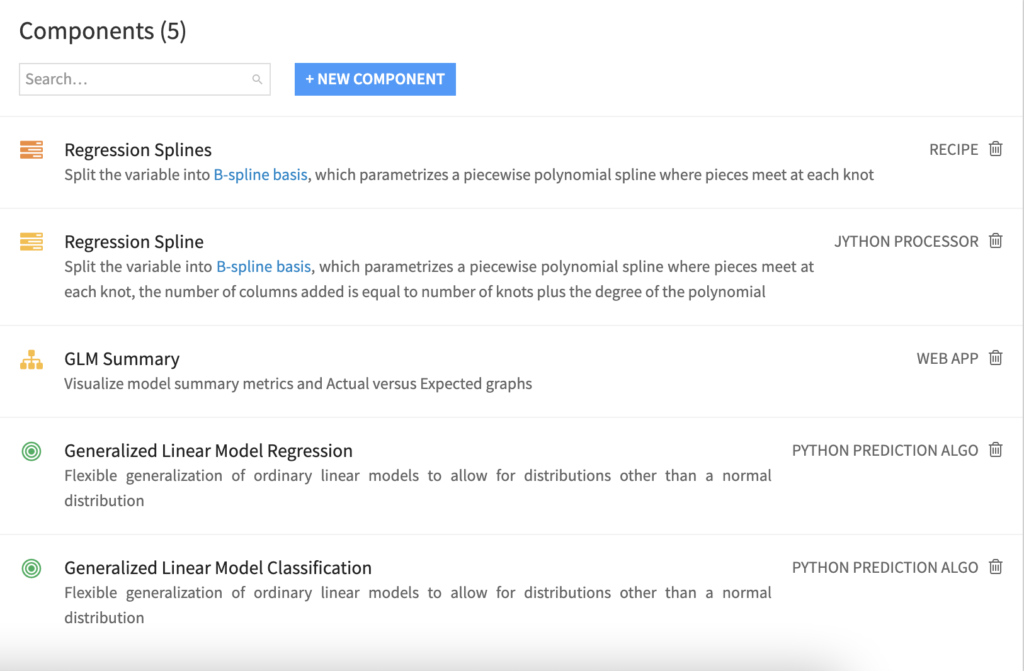 To use the Generalized Linear Model Regression and Classification algorithms in the visual ML, the runtime environment must use python 3. An exception is raised if not. The code environment is selectable in Design > Advanced > Runtime Environment. If the DSS built-in environment is already using python 3, there is nothing to change. Otherwise, the user should through the steps:

The plugin contains 5 components to enable GLM fitting. The first two are custom models: one for regression and one for binary classification. A custom view is available in the visual ML to visualize metrics specific to GLMs and Actual Expected graphs. Finally, Regression Splines feature engineering capabilities are implemented both as a custom recipe and as a Prepare step.

In the visual ML, when selecting a Prediction type, Generalized Linear Models become available in algorithms. The user needs to activate the algorithm and then configure it by inputting the parameters:

When the user selects binary classification, the Generalized Linear Model is also added. It contains the same parametrization as the regression. The natural choice for GLM Binary Classification is the Binomial distribution with the logit function, also called logistic regression.

A custom view is available in the part of the visual ML. It can be accessed for a saved model or for analysis, but is only working for GLMs. This view compiles metrics specific to GLMs and Actual Expected graphs.

The metrics computed by statsmodels are outputted:

Actual versus Expected graphs give a visual representation of the fit with the data. They each compare model responses with actual responses in different ways. The user selects the variable of interest among the columns from the training dataset, excluding the target, whether they were used in the training or not. The variable of interest is binned in 20 bins maximum when it is numerical, grey bars represent the weights of each bin in the dataset.

Regression splines is a feature engineering technique that allows for defining the relationship between a feature and the response. The recipe computes the spline basis variables that can then be used as features of the model. The user needs to input:

Users can choose to compute regression splines basis via a custom recipe or as a Prepare step in a Prepare recipe. It works in a very similar way as the custom recipe, but computation is done row by row. Therefore, the user must set the lower and upper bounds of the spline. The processing fails if data points fall under the lower bound or over the upper bound.