Classify your images from pre-trained models or retrain these models to best fit your data ⚠️ Starting with DSS version 11 this plugin is partially superseded by the native image classification capabilities.

⚠️ Starting with DSS version 11 this plugin is partially superseded by the native image classification capabilities.

With this plugin, you will be able to classify you images without having to train a brand-new model. It can be done by downloading a pre-trained model from the web and then use it as it is, or retrain it to fit you own data. This plugin provides the following components:

Note: Though the previous version was split in two to handle GPU (One plugin for CPU and the other one for GPU) , the new version of tensorflow allows to use both GPU or CPU in the same plugin.

Right after installing the plugin, you will need to build its code environment. If this is the first time you install this plugin, click on Build new environment.

Note that Python version 3.6 is required, with system development tools and Python interpreter headers to build the packages. You can refer to this documentation if you need to install these beforehand.

Warning: if you were previously using the former deep-learning image plugin (CPU or GPU) and now want to use this new deep-learning plugin instead, you will need to update the existing flows with new recipes and re-download the pre-trained models.

Extract the features coming from any layer of a pre-trained deep-learning model.

Partially retrain a model to fit your own data, and parametrize it the way you want. 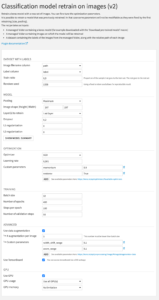 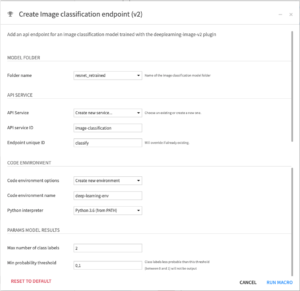 Some projets that use the Deep-learning image plugin have been developed: