Example of a decision tree edited within the webapp.

This plugin offers one visual webapp to build a decision tree step by step, and two visual recipes to score and evaluate datasets using a decision tree made with the aforementioned webapp.

This plugin can be used for binary or multiclass classification, but does NOT yet support regression.

The webapp can be used for exploratory analysis, to come up with new ideas for feature engineering or to better understand the content of unfamiliar datasets.

Specific business rules can be implemented, and effectively compared with results from Machine Learning algorithms thanks to the two recipes.

The webapp can also be used to interactively bin data.

The plugin can be installed from the Plugin Store or via the zip download (see above).

Use this webapp to create and visualize decision trees.

From the landing page of the webapp, one can either create a new tree or load a previously saved one. 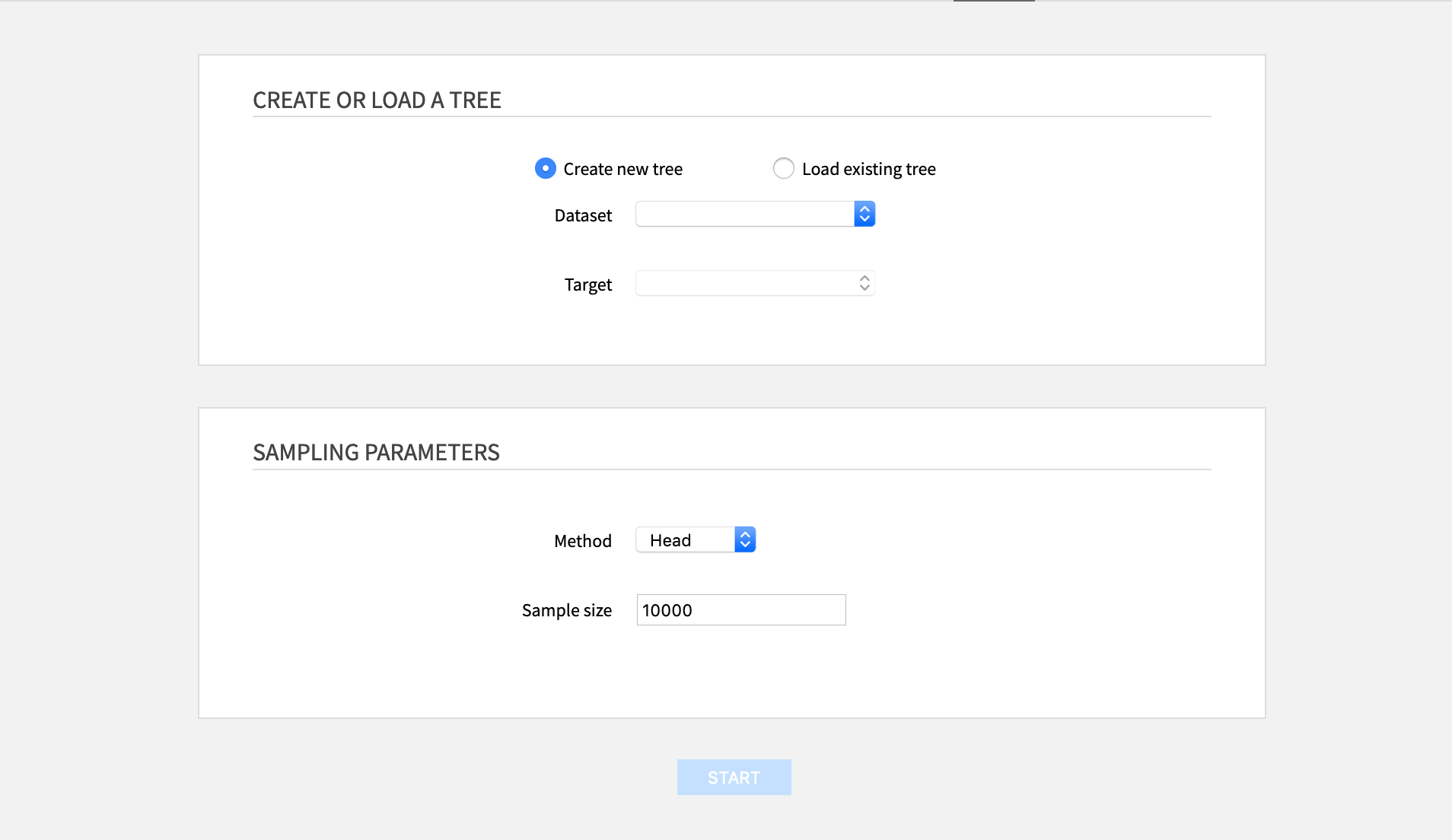 Create or load a tree

The webapp has three modes: one to edit the tree, and two to visualize it (as a tree or as a sunburst).

The edit mode allows the user to progressively build a tree from the root by creating splits.

Select a node
After a node is selected, the Selected node section updates with various information:

Creating splits
A split can be seen as a rule to separate the data between nodes, according to the value of one of the features of the dataset. In the decision tree builder, the features are treated as either categorical or numerical. As such, two types of splits are possible (categorical and numerical). To create N nodes, one has to create N-1 split.

Note that for numerical features, missing values are replaced with the mean.
The split editor varies depending of the type of the feature on which the split is being created or edited.

Split editor on a categorical feature

The upper part is a stacked histogram of the target distribution across the values of the feature. Only the ten bins with the most samples are represented, in decreasing order.
The lower part is the editor itself. To create or edit a split, one has to select one or more values in the list of the values taken by the feature. This list can be filtered by clicking on the magnifying glass on top and using the search bar that subsequently appears.
A split cannot take a value that already has been selected by another split on the same node; the value must first be unselected from this other split.

Split editor on a numerical feature

If the selected node is a leaf, there is one extra action available in the split editor of a numerical feature: switching between types (ie. the way the plugin treats the feature: categorical or numerical).
The upper part is a stacked histogram of the target distribution across the values of the feature. The data is divided between up to ten bins.
The lower part is the editor itself. To create or edit a split, one has to enter a numerical value.

Auto-creation of splits
For both categorical and numerical splits, the user can choose to let the webapp backend compute automatically splits, by clicking on Auto create, and then entering the number of maximum desired splits.

Auto creation is not available when:

This visualization mode features the tree of the edit mode in a full screen view. Every node of the tree has a tooltip displaying its main information (probabilities, samples), along with a pie chart of the target distribution.

This visualization mode features the tree as a sunburst, with every arc corresponding to a node of the tree from the edit mode. When hovering upon an arc, the decision rule is displayed on the left. Clicking on an arc puts the selected arc in the center of the sunburst.
Since the size of an arc is proportional to the number of samples it has, some arcs may be too small to be displayed.

Available metrics (only if Filter metrics is checked):

Get the Data Sheet